The latest edition of Brimm News! is here. In this issue, we highlighted the work our students have created in art. In addition, our cover story features two seniors and their project “No More Empty Desks” to bring awareness about the impact of gun violence. The students painted desks which symbolize the thousands of children and teen killed from gun violence. For more about the project and the students, click here for an article published on Philly.com. 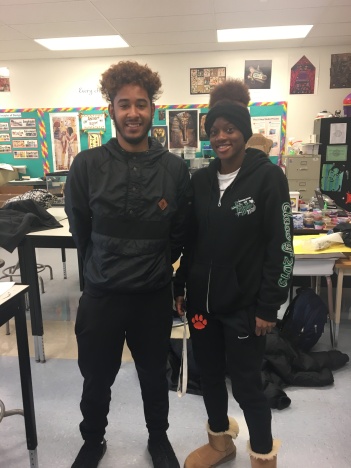 Students in US History II began the year with two projects. First, students selected a famous person of their choice to research and present. We had a variety of people including Beethoven, Larry Bird, Barack Obama, Oprah, and Claude Brown.  It was great to start the year with a creative tone. Next, students studied the Reconstruction Era by examining primary sources. Students compared Lincoln’s, Johnson’s and Stevens’ plan for Reconstruction and then created their own Reconstruction Plan. The next part of the unit focused on the rise of industry, immigration, and urbanization. As the marking period ended, students began studying the Progressive Era and will end with World War I. This year marks the 100th Anniversary of the United States entering World War I and I’m excited to share new information and resources, including passages from Michael Kazin’s book, War Against War, which details accounts of the Americans who opposed the United States from entering the war and the story of the Christmas Day Truce.

As quickly as summer ended, so did the first marking period! My colleague and I were saying earlier today that November came up almost out of nowhere and we couldn’t believe the end of year is almost here. We have been so busy and the students have been working really hard. Students in US History I began the school year learning about the colonization of the Americas. They examined primary source documents, data, various types of text, and different form of media to understand why Europeans came to America and how geography affected development. Currently, students are learning about life in colonial America and we are leading up to the American Revolution. Earlier this week, students became detectives and investigated the Boston Massacre. They had so much fun! Below are some pictures of my detectives hard at work! 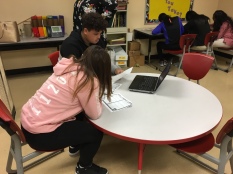 In the unit, Prosperity and Depression, students in U.S. History II learned about the Roaring 20’s followed by the Great Depression. They examined the causes of the Great Depression and how it affected every aspect of life in America. Students also examined how the Great Depression had a harsher effect on African Americans. The Great Migration lasted from 1916 – 1970.  More than 6 million African Americans left the South for cities in the North and West. Harlem, became the center of African American culture in the 1920s. They hoped to build better lives for themselves but still faced adversity in the North. As the 1920s roared on, life as Americans knew and enjoyed drastically change. The Stock Market crashed on October 29, 1929 and began the Great Depression. 1932 also brought about political change as Franklin Delano Roosevelt defeated incumbent, Herbert Hoover in the 1932 presidential election. In 1933, Congress passed the 21st Amendment, which overturned the 18th Amendment and ended prohibition. Crime and employment were up. At the end of this unit, students completed a project about the stock market (RH.11-12.7 and W.11-12.2) . To better understand the stock market, students chose three companies on the New York Stock Exchange and researched the closing price for each day in January. Then, they analyzed the data and created a graph with the information.  Finally, students researched the causes of the Great Depression and more information about the New York Stock Exchange. To conclude their project, students explained if they would have invested their own money into any of the companies they chose. 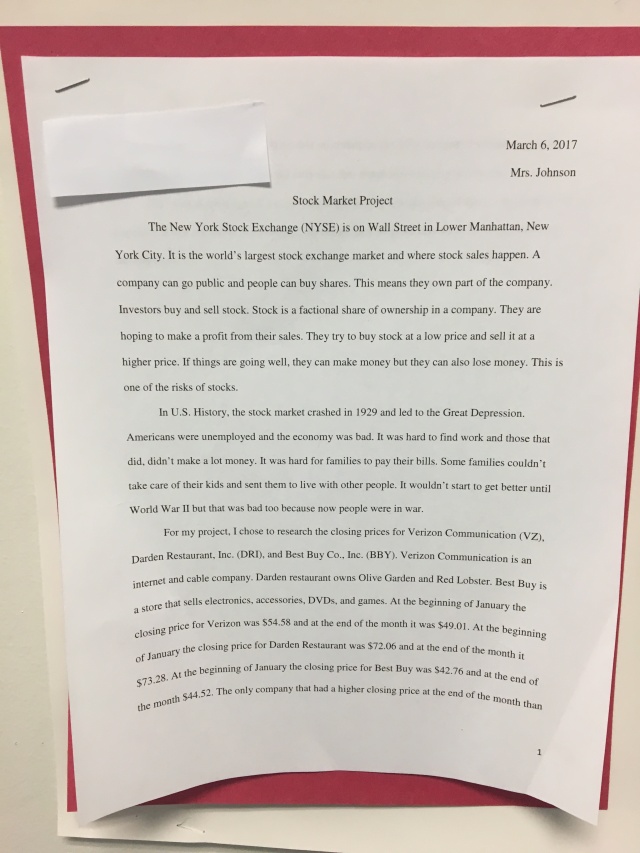